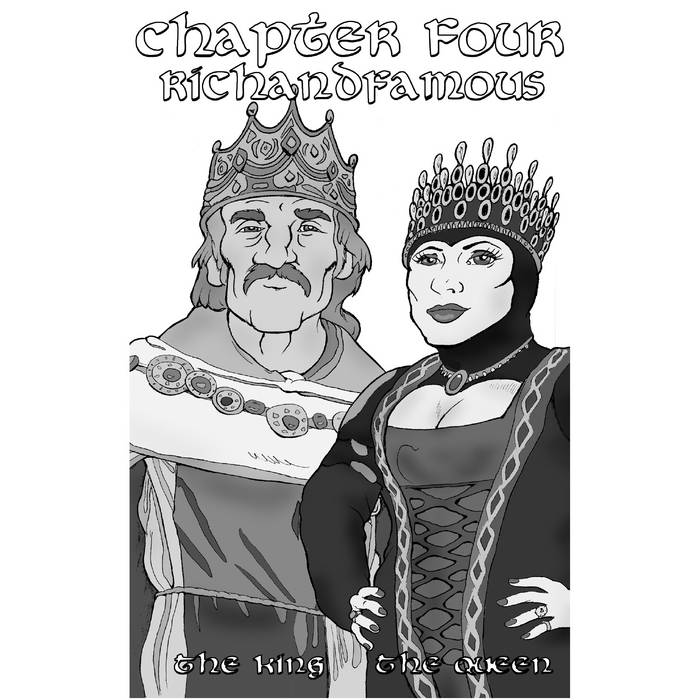 Rip had spent some time in the village’s drunk tank back home, but this Fairyland dungeon under the grounds of the Royal Family’s magnificent but foreboding castle was in a completely different league. As rich and successful as Rip and Danny Elfin had felt just hours earlier meant nothing now when confronted with the real power of the realm and the uncertain fate that surely awaited them both. Being handcuffed and seated on a bench in the dungeon’s holding cell makes one rethink one’s priorities. A long-haired, tattooed, heavy metal fan is handcuffed and seated next to them, also awaiting arraignment.
“Why are you here?” Rip asks the metalhead.
“The boneheads think I worship the Devil,” says the metal fan quietly, without looking up.
“Really? You're a devil worshiper?” inquires Rip.
The man turns his head to snap angrily at Rip, “No, man. I'm a Metalhead!”
“Why do they think you worship the Devil?” asks Danny Elfin.
“It's because we like the same music,” the long-haired young man answers.
“Want to know why we're here?” asks Rip trying to be friendly.
“It's because you're hippies, right?” answers the metalhead as a palace guard enters the holding cell.
“Come on you troublemakers, time to face your fate,” says the guard who then leads the metalhead, Rip and Danny through large wooden doors into a big hall filled with people. There is a platform at one end and on the platform sit the King of the Fairies and his queen.
The royal bailiff calls out the announcements, “Your Royal Highness, King George the Most, the King of all the Fairies, Ruler of the Riff and Protector of the Faith, presented to you for your judgment are today's prisoners of the Realm.”
The guard pulls the metalhead, Rip and Danny by their chains to the center of the room and before the King and Queen.
“And what do we have here?” asks the King, staring intently at the ragged trio.
The Bailiff reads the charges as the guard drags the heavy metal fan forward, “The accused is charged with worship of the Devil.”
“There can be but one ruler in this land! Tell me, to whom do you pledge your allegiance? Who is your true ruler?” inquires the King of the long- hair.
“METAL RULES!” shouts out the Metal fan, defiantly.
The King is outraged, stands up and commands, “OFF WITH HIS HAIR!”

“No! No!” cries the metalhead as the guards drag the struggling fan from the room while a large burly man wearing the executioner's costume follows, snipping his pair of scissors in the air, menacingly.
The King of the Fairies sits back down upon his throne next to the Queen and gestures for the guardsmen to bring Rip and Danny up with the chains still on their wrists. Again the bailiff reads the charges.
“Danny Elfin and Rip Van Winkle, accused of belligerent attitudes and of using obscure references,” reads the Bailiff off the scroll of charges. A murmur goes through the crowd.
“Rip Van Winkle? Thee Rip Van Winkle?” asks the Queen.
Danny Elfin slowly and meekly steps forward to speak, “Yes, Mum. The musician's musician, the poet's poet and the king of rock and roll.”
The King suddenly rises from his throne, again enraged.
“YOU DARE TO DECLARE YOURSELF KING?” screams the King as Danny lunges backward and gestures to Rip.
“Oh, no, Sire! Him, he's Rip Van Winkle, not me!” insists Danny Elfin, throwing Rip under the proverbial horse cart.
“What's rock and roll?” whispers Rip under his breath to Danny.

The King sits back and looks quizzically at the two while stroking his beard.
“You two fairies just seem like dirty hippies as far as I can see,” he finally comments, after some length.
“I ain't no fairy!” shouts Danny, showing a flash of temper before sulking back and adding softly, “Your Highness...”
Rip smiles and slowly steps forward trying to explain, “This is just a big misunderstanding your Highness. I was just coming from a concert and...”
“Wait!” interrupts the Queen, suddenly, “You are Rip Van Winkle the famous musician?” She then smiles, delighted, “Why, our daughter, the princess, adores your music.”
The King turns to look at the Queen, “She does?”
“She most certainly does! This man is no derelict, no dirty hippie, my dear. He is a national treasure!” reassures the Queen.
The King looks doubtfully at Rip, “He is?”
“He is?” whispers Rip, under his breath.
“He most certainly is,” announces Danny Elfin, confidently, as he steps forward again.
The King then rises from his throne and loudly addresses the assembled congregation, “Then it is my decision that he must be set free at once!”
“On one condition,” interrupts the Queen. “On one condition!” shouts out the King.

“That he signs an autograph!” continues the Queen.
“That he signs an autograph!” parrots the King.
“For the Princess,” adds the Queen.
“Summon the Princess, immediately,” commands the King as the Queen excitedly steps down from the throne platform and walks toward Rip while a guard releases his handcuffs and hands him a quill.
As the Queen steps toward Rip, she reaches out for a piece of parchment from a guardsman. Rip steps toward the Queen and reaches out to sign her ample cleavage busting out from her gown as he has been requested to do by groupies in the past. Fortunately for him, the Queen turns toward him with the paper just in time to save him from embarrassing them both.
“Oh yes, of course,” blushes Rip.
Rip autographs the parchment while a guard releases Danny Elfin from his bonds. He then hands the autograph back to the Queen who studies it with giddy pleasure as a guard escorts the teenage Princess into the courtroom. She has the appearance of a goth rocker and snaps her chewing gum with an especially bored expression. The King takes the paper from the Queen who looks surprised and disappointed as he hands it out to the Princess. The Princess does not take the paper but glances at it briefly before turning her head away in disinterest.
“Whatevs...” she yawns.

The Queen quickly snatches the paper back from the King and returns to her throne.
“And now,” announces the King, “you must perform for us!”
The King gestures to his royal musicians to come forward to back up Rip while a guardsman hands him a lute. Rip plays a song while the King, Queen and the Royal Court dance a minuet. None of the dancing guests or the royal couple are aware that Rip’s song is pretty critical of the opulence and conspicuous consumption Rip has thus far witnessed on his rise to high society. But being a celebrity entertainer does have its perks and Rip is toasted as the new toast of the town. As the song ends, everyone stops dancing and the crowd applauds except for the princess who quickly walks out of the ballroom, saying to Rip as she passes, “You suck!”
“Can't please everybody. As long as the check clears,” laughs Danny Elfin who overheard the princess and saw the crestfallen look on Rip’s face.
The Queen approaches Rip and also having heard her daughter’s critique tells Rip, “I command that you forgive my daughter. Children can be so impetuous.”
“I understand, your Majesty,” says Rip, “I have a daughter and a son myself.”
“Are they also irritable and annoying?” asks the Queen.

“They can be, when they're hungry or pooping,” says Rip.
“Where in the Kingdom is your home?” inquires the Queen.
“Ah... across town. Way across,” says Rip.
“He's on tour, your Majesty,” interjects Danny Elfin, “We've been traveling throughout the realm, performing for your Highness's subjects.”
The King steps forward to join them.
“By the looks of you I would never have guessed you were a subject of some note, Mister Van Winkle,” says the King.
“It's the new look, dear,” says the Queen, defending Rip.
“He is a musician of the people, my Lord,” adds Danny Elfin.
The King shakes his head in frustration, “I just don't understand, half my subjects complain of not having enough to look decent and now there are subjects who look like beggars on purpose!”
The Queen gently takes the King by the arm, “Now dear, don't aggravate yourself.”
“It just wreaks havoc on property values. Dirty hippies!” says the King as the queen leads him away. Rip and Danny look at each other.
“Let's get out of here before they decide to give you a shave and a haircut,” recommends Danny, “I'll go get the tip jar.”

The Queen and King slowly walk up a long stairway towards the upper bedchamber when the Queen hears a commotion outside a window. They look down to see a crowd of hippie protesters carrying "Free Rip Van Winkle" signs.
“Free Rip Van Winkle! Free Rip Van Winkle NOW!” shout out the crowd in unison.
“Oh my! That Van Winkle character certainly is popular,” says the King, impressed.
“And that popularity is making him powerful!” observes the Queen.
“Maybe I was too lenient with him?” asks the King while turning to the Queen who begins to show some concern.
“Perhaps he may be persuaded to throw his popularity behind you?” suggests the Queen.
“What? Those dirty hippies supporting me? No thank you!” says the King, indignantly.
“Well then, he could cause trouble for you down the road,” says the Queen.
“No, my dear,” laughs the King, “He'll be no trouble at all. I'll just have him executed.”
“Executed?” exclaimed the Queen, “He already has his supporters causing a scene.”
“Alright, assassinated, then,” says the King, exasperated.
“That would be more prudent, dear,” says the Queen, approvingly.

“You know best, Mother,” the King says to the Queen as she again takes his arm as they continue up the stairs.