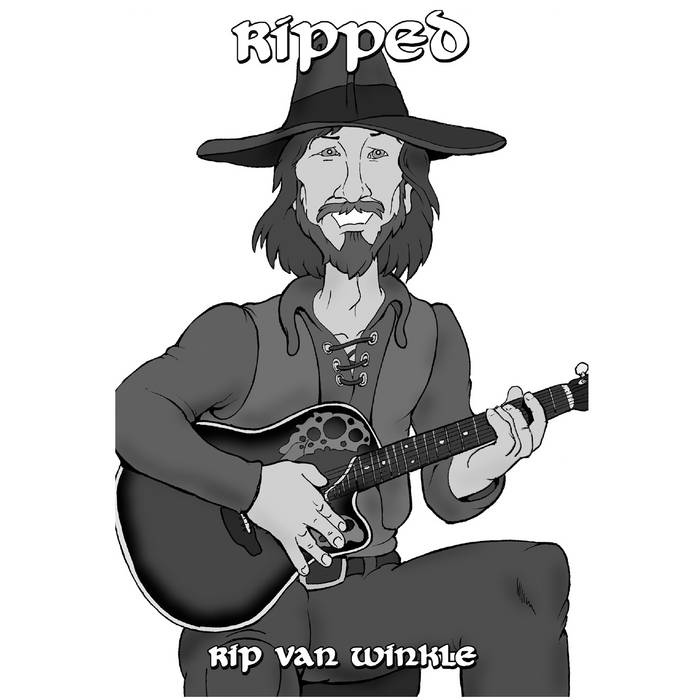 The Royal Palace was not nearly as foreboding in the morning hour light as it seemed to be with the dudgeon as its first impression. Rip and Danny Elfin felt like kings themselves as they left the castle to cheering fans and entered the waiting limopede. As they slowly cruised beyond the compound’s front gates, a paperboy waves the morning edition high above his head.
“Read all about it!” shouts the paperboy, “Rip Van Winkle plays Royal Command Performance. The Aristocracy rattle their jewelry!”
Rip is delighted, but Danny Elfin seems lost in thought.
“The King's really got it made. No matter how rich and famous you become, you'll still be a subject of the Crown. That's the gig to get,” he says to no one in particular as Rip looks out the window to see Herbie hitchhiking on the road ahead.
“Hey, there's Herbie. Let's see if he wants a ride,” says Rip.
The centipede slows down and pulls over to pick up Herbie who hops in back with Rip and Danny.
“Hey Rip, nice limopede, man!” he says, duly impressed.
“Herbie, you won't believe where we just came from,” says Rip, excitedly.
“The King, man. I know, I heard it on the radio,” Herbie tells him.
“What's the radio?” asks Rip.
“It's this thing, man,” says Herbie who reaches toward the back of the driver’s seat and turns on the built-in radio. One of Rip's songs is playing.
“What? Is that me?” says Rip, surprised. “How can I be playing here in the car while I'm just sitting here?”
“It's the DJ, the guy's sending his memory of your singing through the air and we pick it up on the radio,” explains Herbie. “There are other stations with other people sending their thoughts out. You change to their station by turning this dial here.”
Rip reaches out and turns the dial. Another station comes on playing another of Rip's songs but it doesn't sound quite right.
Herbie explains, “This guy doesn't quite have you down. He's probably remembering what you sound like from hearing someone else do you.”
Rip turns the dial again and another station comes on playing another Rip song, only this one sounds even worse and the lyrics are wrong.
“Ugh,” Herbie grimaces, “the Punk Rock station!”
Danny Elfin points at the radio, “This is the music those punks listen to that attacked the car.”
“No wonder they're so violent,” says Rip.

“See? This is what happens when you don't have control of your own music,” says Danny, getting irritated. “You can't let anyone who wants to copy your music and mess with it like this get away with it!”
“No, it's cool, man,” says Herbie, disagreeing. “People should be able to take what you give them and add their own thing. That's how it evolves.”
Danny Elfin is not about to argue the point and simply says, “Oh yeah? You guys need to meet 'E'. He'll set you straight.”
“Wow! You know Big E?” asks Herbie, impressed.
“I do now,” says Danny.
“Who's Big E?” asks Rip.
“E is huge, man! He was the biggest star ever!” explains Herbie, excitedly.
“Until he supernovaed,” continues Danny. “Here's his mansion now. These days he never leaves and hasn't done anything new in years.”
The centipede limo pulls through the gates of the Graceland style mansion. Rip, Danny and Herbie enter the mansion and walk into a large room where E sits on pillows. He is a cross between Elvis, Jabba The Hut and Buddha. His gold lame jumpsuit is bulging at the seams and is unbuttoned down to his navel exposing his gigantic belly. Danny Elfin approaches E and rubs his tummy in a sign of greeting.

“Greetings E,” says Danny.
“How ya'll doin'?” responds E in what will become known in the future as a heavy Southern accent.
“Fine E, just fine. I'd like you to meet Rip Van Winkle. He's on his way to becoming the new you,” says Danny introducing Rip, who steps forward in awe.
“How you do? Please to meet ya,” says E in his friendly manner.
“Nice to meet you, too,” says Rip.
“What can I do for you?” asks E.
Danny Elfin gestures toward Rip, “He'd like to know how you came up with your incredible string of hits.” He then whispers to Rip, “He doesn't just do music either.”
“Well, I'll tell you my secret,” yawns E as he seems to roll off his pillow onto the floor. “I don't really come up with anything on my own.”
“You don't?” asks Rip.
“Naw,” says E, waving his hand in the air. “I just take a cruise through time and see what's out there. Then I just take the good parts and mix them together. It’s my own style. That way I come up with original pornograph records, motion flickers and CB shows.”
“You just take what you see and hear through history and steal it?” asks Rip, incredulously.
“No son, I sample it. Ever hear Stairway To Gilligan's Island? That was me,” responds E.

“Why don't you do any more?” asks Rip.
E’s mood turns introspective as he says sadly, “Ahh, man, the stuff that's out there now... you don't wanna see it, man. Believe me, you just don't wanna know.”
“But what about the music? Don't you still care about music?” asks Rip.
E’s massive face brightens up as he tells Rip, “I've got other interests now. Big interests, real big.”
“Like what?” asks Rip.
E lifts his left hand and extends his little finger with a pinky ring on it. He begins to sing and doesn't move at all except for rising his little finger up and down and in and out in time to the beat. His belly wiggles like Jello. His song is all about his passion for food which has become a symbol for wealth and success. But having too much has left Big E isolated and alone, even unable to continue doing what brought him his massive success and massive weight. Rip, Danny and Herbie applaud as E ends his song.
“Well,” says Danny, “I think you've shown all of us here just how you've become the big, big star you are today.”
“Yes, Mr. E, you've really given me something to think about, sir. Thank you,” says Rip.
“Thank you very much,” says E as he tries to roll himself back up onto his pillows.

Rip, Danny and Herbie leave the mansion and return to their limo. Once inside the limo they drive out the gates and onto the city street.
“That guy's had it all, seen it all...” says Danny Elfin, admiringly.
“And eaten most of it,” interrupts Herbie. “I couldn't understand a thing he said.”
“Why is he called 'E'?” asks Rip.
“Are you kidding?” laughs Herbie. “Look at
him, he's Enormous!”
“Someday,” Danny says to Rip, “you'll be as
big as E.”
“I think you'll need a bigger car, man,” observes Herbie.
“You'll have bigger everything. Look,” says Danny as he points out the window of the limo which is passing a series of billboards that feature Rip advertising various products from running shoes to underwear. Herbie looks at the billboards with disgust, and when he turns back to see Rip, he's wearing a white jumpsuit and shades.
“You've changed, man!” shouts Herbie in disgust, “You've sold out! You've changed! Let me out! let me out of the car!”
The centipede pulls over and Herbie jumps out.
“Come on, Herbie, I haven't changed. Really, I haven't. Get back in,” pleads Rip while Herbie starts walking down the road, sticking his thumb out to hitch a ride.

“Forget that guy, Rip. Go on, let's go,” says Danny ordering the centipede to drive off, leaving Herbie in its dust.
The centipede runs through the town that now has a serious ghetto with homeless people living in the street.
“What happened here?” says Rip, shocked by the sight of poverty he’s never witnessed before.
“Nothing,” answers Danny Elfin nonchalantly. “Just some people don't know how to allocate their resources properly.”
The people in the street see Rip riding by and run out to greet him as he passes.
“Rip! Rip! I know all your songs!” shouts a man dressed in rags.
“Rip! I need more of your music! Please! Give me a new song!” yells a woman apparently living out of a cardboard box on the street.
A man emerges from a pup tent set up under a freeway overpass and runs toward the limo, “Rip, I gave you everything I have! Please, I need more music!”
Rip is now extremely concerned and turns toward Danny, “What are they talking about?”
“Those are just some of your fans, that's all. They're the ones who do stuff for you so you're free to create your music. No biggie,” says Danny dismissively.
“But why are they so shabby and sick looking?” asks Rip.

“It takes a certain amount of energy to keep oneself in shape and I suppose they're just too busy,” explains Danny.
“Too busy doing things for me?” asks Rip, appalled.
“They only do it because they want to,” says Danny, soothingly.
Suddenly a homeless woman runs up and bangs at the limo’s window while it sits at a stoplight, “Rip! I need more music, please!” she pleads.
The limo pulls away as Rip watches her fade into the background.
“It sounds like they need to. I don't understand, why do they need to spend so much on my music when there are so many of them and my needs are so few?” he asks Danny.
Danny Elfin smiles at Rip’s naiveté.
“It's not just about you anymore, my boy. You've got a lot of mouths to feed now. Speaking of which, here we are!”
The centipede pulls up to a giant, shiny, triangular pyramid-shaped office building with a large sign that reads "ELFIN MUSIC" above the entrance. Rip and Danny climb off the centipede and enter the Steam Punk designed interior of the building.